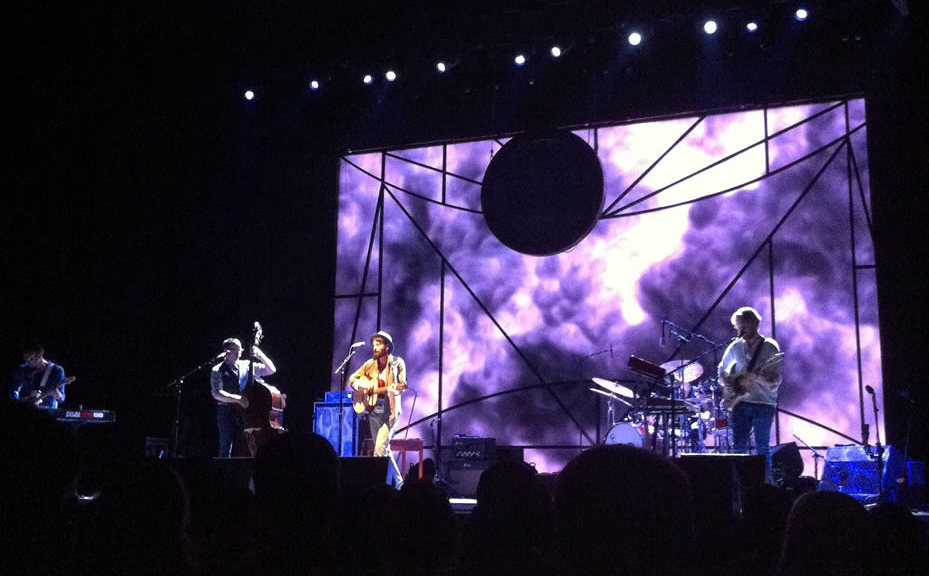 This was a show I was hoping I could see when a press pass came down the pipes at the very last minute, day of show and boom! there I was in an excellent seat in one of the most ornate vintage 1920’s deco style theaters in the country.

The press pass came courtesy of the opening act “The Belle Brigade” so it’s most appropriate to mention their clear sweet sounds prior to the headliner whom I thought I was going to miss  this time around. This was my very first exposure to The Belle Brigade and I had no idea what to expect.   From their first song  the 4 piece Belle Brigade’s presentation was very personable.  Their sound quality was polished and the mix for their set was virtually flawless. (That factoid  returns to weigh in heavily during the headline set….)  This band is fronted by drummer/vocalist Barbara Gruska  and her brother  guitartist/vocalist Ethan Gruska.  On writing this I discovered their website has virtually no bio. so I had to wiki them up, where I was reminded of the only bit of information I had on them befrore the show;  the grandfather of the  sibling core of the band is Oscar winning composer John WIlliams. (Google him up.)

While reaching for some descriptive thoughts about the band a few measures reminiscent of The New Pornographers came floating by. But I’ve seen the New Pornographers live and this band really had their set a lot more together than when I saw the Canadian bunch at Mercy Lounge in Nashville a few years back.   But as soon as I noticed it, that style of manic, extreme songwriting faded into a pretty consistent melodic set of songs that I then decided sounded “high end contemporary Nashville” which immediately made me wonder where they are from.  Eventually they announced they came from L. A. So there You have it, L.A. is the new Nashville.  The band obviously revolves around the duo of Vocalist/Drummer  Barbara Gruska and vocalist guitarist Ethan Gruska.  Other than moving the drum kit to the front of the stage the main clue was the Mickey Dolenz style vocal mic. for the drummer, despite her having the more interesting hairdo of the two.  Barbara Gruska’s vocals  somewhat reminded me of a combination of Neko Case (on her best behavior) and the lovely voiced Megan McCormick, who is currently the touring guitarist for Jenny Lewis’ band and also has lots of solo and collaborative history. For that matter a lot of their songs  sort of reminded me of Jenny Lewis but without the teen pop interludes.  I especially noticed those similarities while focused on my twitter thang (for benefit of my vast audience of course.. : / ) which is what gave rise to this anomaly:

Tweeting while girl with nice voice sings onstage. Look up, it’s a dude with a beard that sings like a girl. #awkward

So apparently the guy in the duo has the sweeter voice of the two and is what brought on the Jenny Lewis comparison.  Nevermind the snarky general approach to this concert review.  This is a good performing group and they would probably be able to melt a few hearts on date night if You could catch them close up in some cozy chamber, so keep an eye out for The Belle Brigade just in case they pop up somewhere close by where your crushes lie, they could be your secret weapon.

Ray LaMontagne has been one of the most consistently interesting recording artists on the scene for the last few years.  Despite NOT being rock n roll or any of the newer generic electronic styles he sort of crept around and past the whole Americana bandwagon and became  distinctively his own style of performer.  With too big of an onstage setup and too ambitious on record to be called a “singer/songwriter”  He almost falls into the Van Morrison style of recording and performing artists if  there is more than one person allowed in there.   As far as any kind of (sorry  about this tag, sorry again) “adult contemporary”  artists who are actually still recording and not being dredged out of the “classic rock” mortuary this guy really has some integrity in his recordings and since this was my first live experience with Ray LaMontagne his recordings have played the major part in getting me interested enough to make it to his show and determine to write a review about it.   Now here’s where things get a liittle dodgy;  Being involved with the production end of concert production myself I was excited about hearing such a high level contemporary recording artist up close in such a beautiful and comfortable venue this close to home.  Unfortunately something went wrong with Ray LaMontagne’s vocal mix for the most part of this show. For his part, from where I sat I could see that he did everything right the way a pro vocalist should onstage, not “eating” the mic., keeping the optimal distance back from it for the normal volume singing and backing away from it slightly whenever he brought his voice up from a raspy but powerful mellow croon up to a roar,  but there was some kind of “attenuation” or maybe improper compression in the line that made his vocals and the main acoustic guitar sound shallow, staticy and never allowed the volume to rise above or even drop below the median level even when he got as close to screaming into the mic. as he probably ever does.  From my perspective it looked like something was improperly tweaked at the mixing board and this is the only thing that marred this otherwise energetic and aesthetically designed presentation of highly crafted songs.  And since my experience with Ray LaMontagne’s music has been mostly dictated by our fairly well represented local NPR station (WUTC 88.1fm)’s playlist, I will now hand over the rest of this review to Dave Weinthal editor & Publisher of Enigma magazine: who can provide You with more info regarding the songs Ray LaMontagne performed on Halloween nnight 2014 along with the full set list for this show. ~R.

All Treats No Tricks with Ray LaMontagne by Dave Weinthal for Enigmaonline.com

I’m a latecomer to Ray LaMontagne.  And I’m glad. His new album Supernova has caused a little controversy because of a shift in sound. While he built his loyal following through his acoustic singer/songwriting style the new album is more poppy, even psychedelic and more approachable to people like me who are sick and tired of everyone being labeled a singer/songwriter and having to sit there quietly while he goes through some singer/songwriter masturbation and politely applaud at the proper time. It may have been Halloween when he performed at the Tivoli Theatre there were no tricks – only treats. He relied heavily on Supernova as the folkster sounded more pop than soulful. While it may be a diversion for longtime fans he has introduced himself to those like myself who automatically roll our eyes when we hear someone described in this day and age as a “singer/songwriter”. Sure, singer/songwriter meant something in 1990, but to those like me this was always codeword to me for someone with emotional issues using song to provide therapy for themselves and hopefully making a wheelbarrow full of money doing so. I like the new material. Some of the other stuff is fine as well, but there is something to be said about energy and that’s exactly what LaMontagne and his band displayed on this particular Friday night. A lot of longtime fans pissed and moaned over the new material, even acting indifferent. They piped up when LaMontagne sent his band offstage as he performed a trio of songs solo “Burn”, “Trouble” and “Jolene”. The band returned to the stage to join him on “Meg White” from 2008’s Gossip In the Grain”. He finished the night off with “God Willin’ and the Creek Don’t Rise” before coming out for two encores. He finished the night with perhaps his best known single “You Are the Best Thing”.

Opening for LaMonagne was The Belle Brigade. The band is fronted by a brother/sister duo with sister Barbara Gruska on drums and younger brother Ethan on guitar and doing the majority of the singing. The duo were joined by an additional guitarist and bass player and played a high-energy set that was more of an alt-pop genre than anything else.